Why Do Christians Let Hypocrites Chase Them Away?

Why Do Christians Let Hypocrites Chase Them Away? 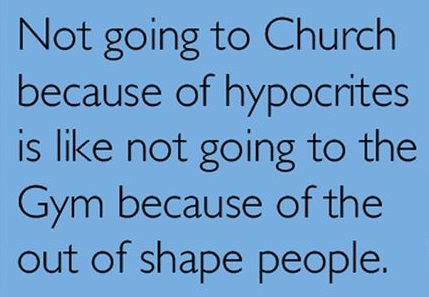 I have, sort of, danced around the subject of today’s blog a few times; mostly in the form of invitations to folks who have left the church to come back. Today, I am not focused on extending an invitation (although the door is always open) as much as I want to ask a question. Although anyone might have ideas about the answer(s), I would particularly appreciate it if former church-goers would respond privately, either via Facebook inbox message or This email address is being protected from spambots. You need JavaScript enabled to view it..

Here’s the question – “Why is it that when people are hurt, disappointed, angered, and/or disillusioned at a church they so often either resolve to never go to church again or renounce their Christian faith altogether?” Please note – there is an “or” in the previous sentence because I do realize those are two different things.

Now the background to the question – I know, and love, several people who have suffered injury in a church context. I also hear/read countless instances of folks I don’t know talking about leaving the church. The #1 most often stated reason I hear is, “I realized that the church was full of hypocrites,” or some variation of that theme.

I spend more time than I want to trying to understand this phenomenon, and trying to figure out what, if anything, we church folks can do to respond positively to it. Here is what I do understand: I understand that Christians, particularly some church-going Christians¸ have a really unfortunate tendency to present themselves as pious, “deep,” nearly-perfect, etc.; and some also present as really judgmental of – well, take your pick – almost everybody. I understand that people come into the church seeking different things, but almost always something really important like truth or peace or community or relationship with God. And I understand that when they think they have found it in a given church, it is extremely devastating when something happens that seems to render their whole experience at that church null, void, and/or unreal.

The part I struggle to understand is why being disappointed by church people (pastor included) would lead to a blanket renunciation of all churches and, in some cases, of Christianity itself? Call me dense, but I honestly just don’t get that.

Here’s how I think of it – I am sure that most people have, at some point, been disappointed by their experience in other places and settings. But that usually does not lead to swearing off of all places and settings of that type. For example, someone may be injured in a hospital because of medical malpractice. She or he might be unlikely to return to that particular hospital, but would go to another one, if necessary. Or someone might get food poisoning at a particular restaurant say, for example, a seafood restaurant. That might turn them off to that particular restaurant, or maybe even to seafood. But chances are that s/he would eventually eat at some restaurant, somewhere again.

I have never known a congregation that did not also have some of the most devout, sincere, disciples of Christ that anyone could wish to meet.

Am I making sense? What perplexes me – and I will admit that sometimes it annoys me and, on my particularly vulnerable days, it hurts my feelings as well – is why people walk away from church and simply refuse to give any other church a chance. Do they really believe that every pastor/minister/priest, etc., is a lying, insincere hypocrite? Do they really believe that every congregation is full of them? I’m the first to own up to the likelihood that every congregation probably has some hypocrites among us, along with a sprinkling of other unhealthy or unsavory types. But I have never known a congregation that did not also have some of the most devout, sincere, disciples of Christ that anyone could wish to meet. As a pastor, I must admit that some of us are not great representatives of our vocation. But God is my witness, I am doing my best to be true to my calling, and because I know that about myself, I also know that it is true of others. I choose to believe, based on my experience and observation, that more of us are genuine than not. What we are not is perfect; and what we are is human. So there will be times when we will fall short and let you down - maybe, in some instances, so egregiously that you simply cannot continue to worship where you were. But why not worship somewhere? Why not another church?

Maybe it’s as simple as church isn’t for everyone. Maybe everyone doesn’t need it, and eventually some decide they don’t want it either. It’s okay to tell me if that’s your truth. At least then I would know that there’s probably nothing we can do. I think it’s the fact that people tend to leave under traumatic circumstances that keeps me thinking that there’s an ongoing injury that keeps them away and the church must have some duty to fulfill to heal it. I just don’t know what, exactly, that duty is.

If anyone who reads this can help me understand, please do. I ask because I want to know if there is anything I can do, or lead Imani in doing, and if successful, pass on to my colleagues that might result in healing and restoration of relationship with God and/or with God’s church. At least, for any who miss it as much as you are missed.

Category: A Word from Our Pastor